Missing link between two-wheeler and automobile

(main blog *click here* in the series published in EVWorld.com)

Will the UN Climate Change Conference in Paris bring car makers to look for new ways? Some say that trillions of dollars in the 'conventional carbon economy' will evaporate when governments take measures to counter global warming. Can the car do both: keep what's good, reverse what's bad?... It can do way more! Click on pictures to enlarge.

Cars represent the freedom to go wherever and whenever you want to. However, they come at a steep price. Although not the world’s biggest polluter, traffic is of direct influence to our living environment, and it is the sector where energy and resources are wasted like there’s no tomorrow. How’s that? Well, during most trips the driver is the car’s only occupant. The car weighs approx. 18–30 times more than that single occupant does. To make things worse, most cars are as wide as the driver measures lengthwise, causing the sort of gridlock witnessed every day. Except for being electrically propelled, the Tesla S is by no means better, as can be seen in the picture.
>>Reduce Footprint<<
Sure, car- and ride-sharing can make car usage more efficient, especially in combination with self-driving vehicles that more or less function as public transport then. Most cars are used only 5–10% of the time. Sure, electric drive will reduce emissions, usually on the basis of fossil-fueled energy plants though. Can we do more? Something more substantial? Yes, we can. Reduce footprint. Free up space. Ditch weight. Save fuel. Or slice battery costs. Further reduce emissions. Win back the freedom that got lost, even experience more Fahrvergnügen. 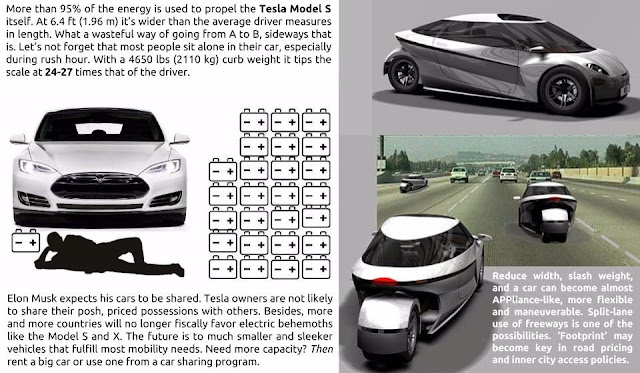 1. By making a vehicle sleek, freeways in particular can be utilized more efficiently. Think of the vehicle depicted here as the safer, peppier, comfier, easier-to-engineer (!) three-passenger version of the i-Road the world’s largest automaker Toyota will roll out in the near future.


2. Weight can be sliced by 50–70%, without compromising passenger well-being and structural rigidity. In fact, safety will go up! Traffic safety implications (separate explanation) have already been brought to the attn. of the NHTSA. Comfort will improve too (long wheelbase).
3. This means that considerably less energy is needed to propel the also low-drag vehicle. Less fuel needed. A small electric motor will do. Ditto a smaller battery pack.

4. The sleeker (and smaller) the vehicle, the less likely it will run into other road users and vice versa. Together with great all around visibility, it'll be ideally suited to self-driving, making it a true auto-mobile.
5. If share-used, such a vehicle can be eco-friendlier, more energy-efficient and cheaper to run per passenger than public transport.

6. Last but not least, a sleek vehicle is more fun to drive than a normal car, especially when taking it ‘through the twisties’. How's that? When a car corners, the weight shift causes it to dip on the outside, all four tires more or less scrubbing for grip. A sleek vehicle needs to lean into the corner to offset the weight shift, like a motorcyclist does, use 4WS to curb yaw. 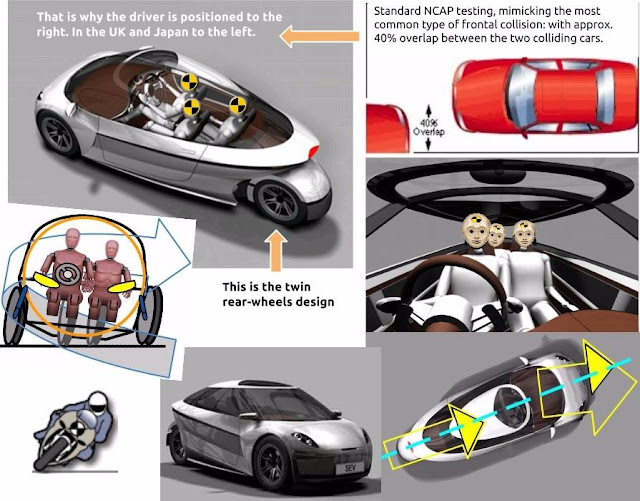 The traditional two-row seating layout forces automakers to use a box-type frame. A pod-like shape is inherently stronger than a box shape (reason why tunnels and airplanes are built cylindrical). The resulting 'Smart ForThree' (no shoulder to shoulder) seating layout ensures class-leading impact safety on all sides and 360° visibility. Passenger heads cannot collide in case the vehicle is broadsided. The driver is seated 'on the other side' for a reason. The tapered rear-end forms an additional safety feature in case of a rear-impact. Ever hit a traffic pole or tree? Click on my name to be linked through to my EV World blog.
Ralph Panhuyzen / sevehicle@gmail.com / ++31 61 743 4661

Automotive experts already acknowledged the 'outside the (car) box' vehicle described/depicted here as a viable alternative, and doable to engineer. It received recognition by a distinguished jury at NAIAS. Auctor intellectualis (and IP holder) Ralph Panhuyzen was involved with the scientific study on car mobility (ISBN-13: 978-90-442-0015-7) in the Netherlands (one of the most densely populated countries in the world) which was held under the auspices of the NWO, the Netherlands Organization for Scientific Research. NB: this presentation is put together for assessment and publicity purposes only. Unauthorized use forbidden. The New Isetta aka Smart ForThree is not an open source project, and formally OHIM registered. If in doubt about the semantics of what is "authorized" (literally: of, by or from the author) and what is not (presenting or using what has been created by someone else as if it were yours) consult a legal expert.

To read more about 'New iSetta', go to my EVWorld.com blogs.
Why would you? Why should you?
The future of auto-mobility
Who's going to be disruptive? 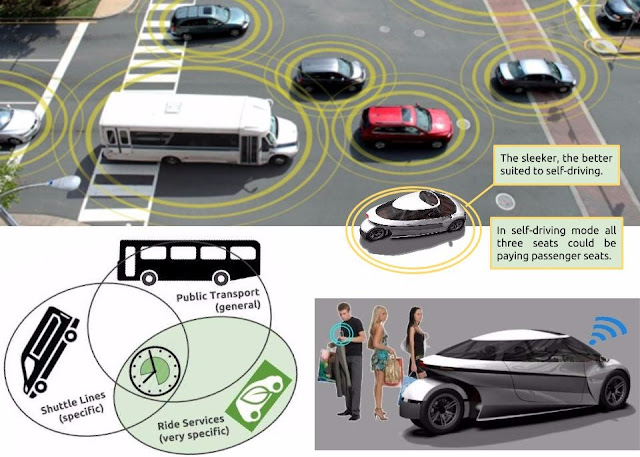 New Isetta
Ralph Panhuyzen is convinced that the car industry will ultimately transform itself into a 'personal mobility' industry that will take the impact of car travel on our way of living and on the environment much more seriously. His ideas led to very specific design criteria regarding the 'Best of Both Worlds vehicle format' he had in mind. Dozens of meetings were held with regard to traffic, road pricing, vehicle regulations, materials use, suitable engines, vehicle dynamics, etc. to fine-tune the concept. His outspoken philosophy and 'vision-induced' vehicle concept have been officially registered as intellectual property. Panhuyzen lives in the Netherlands.